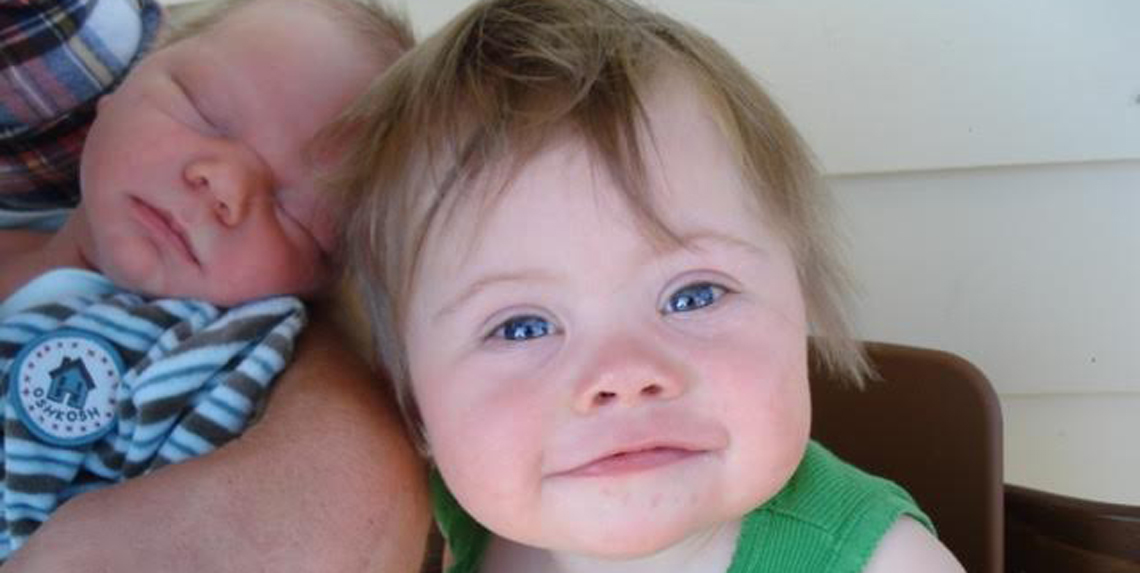 I hadn’t met my son 19 months ago, and I didn’t know I was about to win the lotto. I had no idea about the profound adoration that would fill my world and turn my life from something fairly normal into something extraordinary. I never knew my heart could grow so much.

It just seems like yesterday that I was sweating in a hot office at the local hospital, with swollen feet, aching hands and a feeling of excitement wriggling in my belly. I was all baby. “He, or she, is going to be big,” everyone would say. The other occupational therapists would come into my office to say, “Hi” or “Bye,” and kill some Friday afternoon time, on my last day of work, before I went on maternity leave. Six weeks to go. Six weeks with nothing to do but read magazines, lying in the hammock. It was my first child, my first pregnancy.

There would be no hammock time. Two days later, on the Sunday, I would be in hospital and by Wednesday, I would have a perfect little boy called Isaac, or Ike. By the next Sunday, he would be diagnosed with Down syndrome. He spent six weeks in hospital while he tried to feed and eventually came home with a feeding tube down his nose.

I am glad my husband, who is 12 years younger than me, cried with me. I am glad we held each other tight and felt the fear, but I am also immensely grateful that neither of us did it for very long. There was no blame, but we did grieve for the child we had imagined I was carrying and we let go of his future in order to make room for a much more interesting journey. The feeling of acceptance can be so relieving and beautiful. Now it’s in my heart, I feel like it will never leave.

“We did grieve for the child we had imagined I was carrying and we let go of his future in order to make room for a much more interesting journey.”

A friend of a friend, who has a four-year-old boy with Down syndrome, rang us the day after Ike’s diagnosis. “I hear you’ve won the lotto,” he said. We stared at the phone, on loudspeaker. We were silent. “You’ve won the lotto, mate. They’re the best kids.” He went on to talk about his child, his family and how his son was just like every other kid, needing to be dragged off the sofa to go and get ready for bed.

I remember listening, not just to the words he was saying, but also to the clattering of pans in the background. I could hear the family talking and it was reassuring to listen to normal family life, while we had a sick baby in the hospital’s Special Care Unit. We sat in our living room next to the empty bedroom we had prepared, with Ike’s cot neatly made up and scattered with little teddies. Our house was empty, silent and afraid, and yet this family on the phone was the noisy sound of hope. We had dropped into their normal life for 20 minutes out of our quiet and still night at home, and we hoped that we would be OK too.

Before Ike was born, I had no idea how my being an occupational therapist would come to test me. I had worked with people with learning disabilities and children with special needs for 20 years. I had been the senior occupational therapist at Great Ormond Street Hospital for Children in London, working in neurology and neurosurgery. I understood the medical lingo when the doctors spoke to me about all Ike’s potential problems. Despite this, I felt an incredible desire to love and be loved by this child.

With all the luck of being in the game, I found my roles – as therapist and parent – initially brought confusion for me. I struggled to fit in around other therapists, as just another mum, and struggled to chat casually about my line of work with other parents in desperate need of more therapy. They would say, “Oh, you’re all right then.” Or, “We need help from you.” Medical professionals would talk to me as though I understood everything and yet the funny thing was, I had forgotten everything. Nothing I knew seemed to apply any more. Entering the world of disability on the other side was challenging enough, but this perception that it was somehow easier for me felt isolating.

As a therapist, I knew little of motherhood or parenting, and when Ike was five months old, I was 41 and pregnant again. Tiredness and then another boy, Angus, or Gus, would mean I had little time for assessing Ike or compiling therapy programs. And honestly, why would I?

Why would I? The answer to that was because, in the area where we lived, services were thin on the ground. Early intervention is thought to be key, and yet our experience has been that there hasn’t been much of anything available. We slipped through the net, despite having friends on the team at the Special Care Unit. I chased up the early intervention referral myself when Ike was three months old, only to be told there had been no referral made.

Nineteen months ago, I didn’t know I would case-manage my own child and chiefly provide his early intervention, although now I know that most parents of children with special needs do this, not just occupational therapists or other therapists. I also now understand, and can fully appreciate, how families have little time to follow the home programs I had once so diligently provided.

It was me, the therapist, who called the Aids and Equipment Program and argued the need for a high chair for children with low muscle tone. It was me, the clinician, who looked up normal developmental stages and clinical issues in my university textbooks. It was also me, the therapist, who had to exercise restraint to stop Ike’s care overtaking the rest of my life and relationships. Nobody wants to be married to a know-it-all or feel under pressure to perform as a “therapy dad”. My family would not react well to seeing Ike as my next work project.

I also needed to communicate with my husband about what we should be doing. Thankfully, my professional knowledge did help us in this regard. Trying to sound laid-back rather than give a lecture – after all, my husband wasn’t one of my students – I would introduce new concepts at times when he was chilled out and could take on a new idea. “He needs to practise his saving reactions or he’ll keep falling over and banging his head. Let’s try some games before bed,” I would suggest. We would play games with gusto, both of us singing and dancing in our lounge room or kitchen, the children completely unaware this was “therapy”. I love that phrase therapists use: “It ain’t what you play, it’s the way that you play it.” And if play is the child’s work then Ike was being very productive.

Usually, it was me, the mum, who played games like Round and Round the Garden, just like any parent playing with their child. I had no thoughts of neural networks, anticipatory play or providing proprioceptive input and stimulating tummy muscles. All this may have been happening but I was just being a mum. I was living a dream I had dreamt for so long, of being an English girl in Australia and playing with my child. I had wanted to raise kids on the beach for many years before I met my Aussie husband three years earlier. And we were having our days at the beach, just like other families. I would sit with Ike between my legs in the shallows of the ocean. Each wave that lapped upon us brought tranquillity and positive energy. As a mother, I was complete.

Ike first went to the beach when Luke and I got married. He was 10 weeks old and had been home for only four weeks. My parents had come from overseas and Luke and I exchanged rings on the beach down the road from our house. It was a wedding at which everyone cried and love held in the air like a pink mist over the sand and sea as we walked together, smiling and crying down the aisle of loved ones. Ike, still so tiny, lay tucked in his dad’s proud arms, head falling limply to one side as he slept. We were so happy and soon after, Gus would begin in my belly, and then our family would be complete.

These days, at 19 months old, Ike is walking using a K-walker or pushing his trolley and crashing into the walls, making me think about redecorating. He uses his words, saying, “Up Dada,” and banging his fist into his hand for a biscuit and smiling, expecting the usual answer: “No. No more biscuits, it’s nearly tea time.” Today, I am thankful to say that my different roles have merged into a happy fusion of textbook brain, intuitive therapist and the mummy heart. I feel like any other parent, giving their child with special needs the opportunities to reach their goals and full potential; looking things up, figuring things out, applying for funding, using services and yet mostly playing.

I am cooking and Luke is home from work in time for tea with the boys.
Gus is a telly addict already and is watching TV, sitting in Ike’s old Bumbo seat. Ike is in the kitchen with us, chattering away. He pushes his car around the legs of our dining table like any little boy. And, as I try to have an adult conversation with Luke about his day, intermingled with singing Hello Mr Whiskers, I notice that I, too, am clattering pans.

Sarah Jane Munn lives with her family on the Mornington Peninsula, Victoria. She first started working with adults and children with learning disabilities in 1989 and qualified as an occupational therapist in 1996, specialising in paediatrics. She moved to Australia in 2004 and met Luke, a carpenter, two years later. She now runs her own occupational therapy practice in Rye, Mornington Peninsula.

Submit your own story for our new series here.