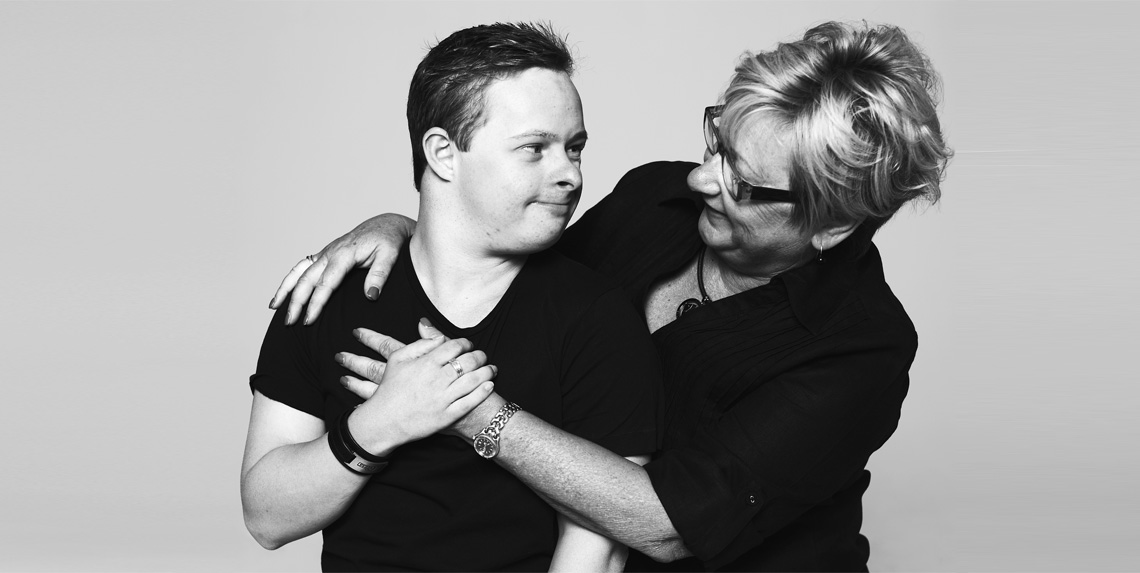 My son, Joshua, and I were recently in the 12-items-or-less aisle at the local supermarket. Directly behind us was an overwrought mother with three out-of-control children, who were running off, grabbing sweets and tearing at magazines. She screamed and swore at them in the loudest voice imaginable. I glanced over at Josh, who has Down syndrome and who was staring straight ahead with a disapproving look. He turned to me and said quietly, “Thank God we’re normal.”

“I glanced over at Josh, who has Down syndrome and who was staring straight ahead with a disapproving look. He turned to me and said quietly, ‘Thank God we’re normal’.”

That’s Joshua for you, or the J-man as his brothers call him. He shares his brothers’ wicked sense of humour and has a large, engaging personality, but he doesn’t appreciate mayhem, screaming or violence. He’s a true pacifist, and certainly doesn’t see our family, or his extra chromosome, as anything other than normal.

With Josh, there is little time to dwell on what could or should have been. He is who he is: funny, charming and sociable. His life may have some limitations but it is a full life. Like many young adults, he is permanently attached to his iPod and mobile phone. He manages his Foxtel IQ remote control and helps his parents manage theirs. He fiddles around on his laptop and despite only basic reading skills, he always finds the latest CDs and DVDs online to add to his wish list.

He is a good companion on overseas trips, attends the gym, works part-time as a volunteer and loves movies. Josh supported his older brother as best man at his wedding not long ago. It was an unforgettable experience for him, and for us. His latest role, uncle, he has embraced with gusto and his sister will often plead with him to come over and help entertain the little ones.

“Josh is the only person I have ever met who is without envy, greed or malice. How can this fact, in itself, not have a positive influence on others?”

But it hasn’t always been this way. Before Joshua, life was good for us as a family in the late ’80s. We were busy with three children and a rapidly expanding business. But for me, at 34, the yearning for a fourth child was strong. I knew my husband thought I was crazy. But, God love him, he came around.

The pregnancy seemed swift and the birth uneventful and on September 7, Joshua Leo came to play. I will never forget the events of that night.

After the obstetrician and midwife had taken a long while to check the baby, the obstetrician took my hand. A gentle, learned man, he had delivered my other three children and, in fact, had been my lecturer more than a decade earlier when I had studied midwifery. He explained, using the correct medical terminology, that the baby had a major bowel abnormality and quizzed my memory of the condition. My mind raced, yes, yes, I remember; major surgery required, plumbing … very fixable. And then the bombshell: there’s a chance he could have Down syndrome. Well, that’s not fixable! I wanted to scream it out, but I remained silent. My husband was strong and resolute. “All will be fine. We can do this,” he said.

I didn’t want to “do this”. I didn’t want to hear it. I experienced my darkest hours during that long, lonely night. As I lay awake, I had visions of an ungainly, weird child, who wouldn’t fit in with my beautiful little ones at home, who were 12, eight and five years old at the time. I feared their lives would be ruined forever, too embarrassed to bring friends home. My life, as I knew it, was over.

Tiny Joshua, at five pounds, or 2.3 kilograms, was transferred to the Royal Children’s Hospital for surgery on day two. The days that followed involved a busy routine of visiting and transporting expressed milk, but within 10 days Josh was home, with the smallest colostomy bag I had seen.

I’ve somewhat lost track of the next two years. More surgery was required. The word “hectic” springs to mind. We started an early intervention program almost straight away, which was invaluable. Meeting other parents and having contact with older children with Down syndrome gave us confidence in our ability and a sense of optimism for the future.
Being busy was advantageous in many ways. I had little time to dwell on what might have been. Days revolved around school and kinder pickups, tennis and swimming lessons, parent-teacher meetings and weekend sport. Josh seemed to live in the car.

Thinking back to the fears from that first night, I failed to consider that I would fall in love with this baby, as indeed we all did. As far as the children being reluctant to bring friends home, believe me, that never happened. And this boy, now a man, is far from weird looking; he’s beautiful and looks just like his brothers.

I am loath to exaggerate and claim that having Josh has transformed us into some super-family and that everyone needs a child with Down syndrome in their midst. That would be a ridiculous misrepresentation. We are an ordinary family in every sense of the word. Josh’s siblings are strong, tolerant and compassionate individuals. I’d like to think that that would have been the case had he not been their brother, but his impact on us is undeniable. Josh is the only person I have ever met who is without envy, greed or malice. How can this fact, in itself, not have a positive influence on others?

I can truthfully say that I have never returned to the despair of that first night. Of course, we have experienced frustration and disappointment along the way, but we have learned to accept that such is life and manage the best way we can.

Josh belongs in our family as he is. Considering his position as the youngest, it stands to reason that the five of us, together with some wonderful friends and extended family members, have over the past more than 20 years adopted the role of teaching him along the way. Of course, the twist here is that Josh has taught us all so much; about ourselves, our individual capabilities and our substance as a family. Thank you, Josh.

Jennifer Hede lives in Melbourne, Victoria. She chose to give up work as a nurse when Joshua was born and has since enjoyed channelling her efforts into the family. Now she has grandchildren, her days are no less busy.

Buy our book and/or submit your own story for our new series here.