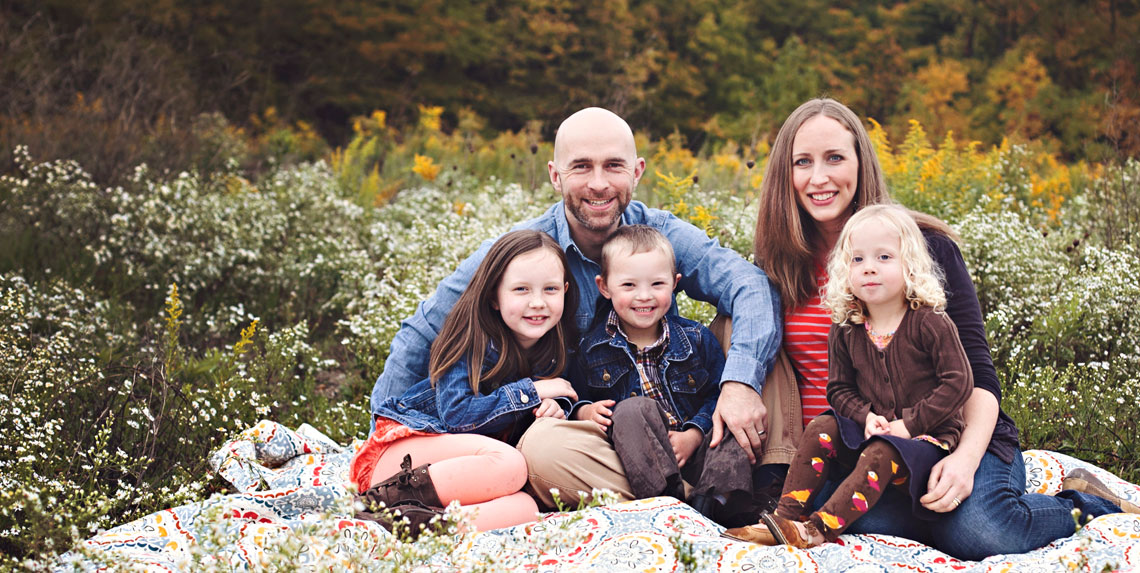 My life has been such a surprise to me. If someone had come up to me in high school and told me that I would get married in my teens, move to the other side of the world and give birth to a son with Down syndrome, I wouldn’t have believed them. I would have been scared of this particular future. But living that out over the past decade has, in fact, been the most wonderful surprise.

I met the Aussie man who would become my husband a week after I graduated from high school in Indiana. He was travelling throughout America. We immediately knew we had found something special in each other. After the initial shock, our families agreed we had a good thing going together and, to make the visa process easier, I was married at 19. We lived in the United States for the next seven years and shortly after the birth of our daughter, Eleni, we moved to Australia.

As homesick as I was, I loved living in Australia. And we were excited a year later to find that we were expecting again. After a casual conversation with the wife of my husband’s childhood friend, I chose to decline prenatal testing at the 12-week stage. They had only just recently given birth to a boy with Down syndrome. Their son’s condition had been picked up early in the screening process. And while they were always steadfast about proceeding with the pregnancy, they had found it especially hard dealing with all the medical information, often negative, without having yet met and held their baby. I figured I was only 28 years old and, if something were “wrong”, I would rather find out after I had my baby there to hold and love.

Ignorance was bliss, until the 20-week ultrasound (I had mine a little late at 21.5 weeks). A doctor from the hospital where we had had the scan rang me the next day, asking me to come in and see him. It was inconvenient for me, but from the way he kept urging it was clear it was important. Thankfully, my husband was able to get off work and join me in the doctor’s office. There, in clouded language, the doctor indicated that our baby’s nuchal fold had measured outside the normal range and was a hard marker for Down syndrome. He said we needed to immediately book an amniocentesis as we only had a few days left to terminate the pregnancy. (At that time, you could only terminate at up to 22 weeks.)
It felt like I was riding the Spinning Teacups, but I remembered that an amnio carried a small risk of miscarriage. I knew we would not terminate no matter the test’s outcome and I was scared to risk my pregnancy just to determine the diagnosis before birth. We declined and left the bewildered doctor behind us.

The pregnancy continued to play itself out. I had my up and down days as to what future this child might bring us. We told family and a few close friends that Down syndrome was a possibility but, still, we didn’t really dwell on it.

At 7.21am, a few days before Christmas, Oscar William Reid McEwen came bolting into the world. As they set him on my chest, I remember thinking that his head was like a perfect little ball. As everyone gathered around to take a first look, my husband asked if it looked to me like Oscar had Down syndrome. I had completely forgotten. As I gazed into his blinking almond-shaped eyes, I said, “Yes.”

Those first weeks are still a blur. Publicly, we were extremely positive from the first. In my heart however, I was broken. How could this happen to me? Doesn’t this sort of thing happen to “special people” who are magically equipped to handle this? I certainly know I am not one of those special ones – I am one of the weak, terrified ones! Waves of sadness, fear, guilt and doubt washed over me. I wondered if there would ever be a time when I wasn’t sad.

But like the rings dissipating from a pebble (or what felt like a boulder) thrown in a pond, the waves of emotion gradually grew further and further apart. I slowly resurfaced to realise that, not only could it happen to me, it could be a pretty great thing to happen to me.

Previous to my son, I had never spent much time around a person with Down syndrome. I had no idea what it would be like to have a child with a “low IQ”. I didn’t know what part intelligence would play in making a person who they are. I think that is where part of my fear came from. I knew he would be different from me and I could not expect him to have the same life as me. The unknown was frightening.

Oscar is now four (and a big brother to two-year-old Pippa and another one on the way!) and I’m still figuring out what having a lower IQ actually means for Oscar. There have been some delays in his speech and a few concepts, but mostly I am amazed and delighted at how clever and determined he is.

I am constantly underestimating him. I used to be able to keep the remote control out of his reach, but he figured out that he could take his shirt off and use it as a whip to knock it off the ledge, giving him full access to all the channels at a nice LOUD volume.

Don’t get me started on the car seat. That child is determined to roam the car. Over the years we have invested in so many “Houdini straps” and other contraptions to keep him in his seat. The boy is too smart. We currently have a red belt clip cover that he can’t undo, though whenever he gets hold of it he hurls it out the door, hoping it won’t be found and he can regain his freedom.

Oscar has a great sense of humour. It started young when he began to suddenly “fall asleep” in his car seat upon arrival home. He got the loud snoring down pat but he could never quite remember to keep his eyes shut, making it even funnier for us.

Oscar is the master of the deadpan face. He loves to do something ridiculous, such as put in crazy false teeth, hang a noodle off his nose or walk around with his sister’s flowered headband on. He’ll casually draw attention to himself with a grunt and then pretend, with a little twinkle in his eye, that nothing is out of the ordinary. He has also mastered making his little sister laugh till she can hardly breathe by doing ridiculous things like walking into walls and falling down with air. (Why do kids find that so funny?) I dread the day he learns his first knock-knock joke.

Oscar is amazingly creative. He loves to play imaginative games. A favourite is pretending to be a dog (or tiger, dinosaur or frog). He crawls around wagging his tongue and will fetch on demand. His big sister loves to make a lead for him and take him for a walk to their playroom “park” for a picnic. He loves to play with his sisters and has a great bond with them. He becomes the most serious patient when they play doctors and will let them poke, prod, roll and wrap him in bandages. (If only he were that patient with me.) He loves to have a turn checking their heartbeats and temperatures, though he hasn’t quite mastered applying the head bandage without blinding his patients. Oscar has a few DVDs he loves, one in particular that features a music concert for children. His memory is amazing and he will sit with his ukulele and act out the entire concert, complete with hilarious costume changes from the dress-up clothes.

He has family traits that are so strong it is obvious to most just how much he is a part of our family (and meant to be). I don’t just mean he looks like a McEwen (he sure does), but he has the quirks and mannerisms of his kin. When he first learned to walk, he walked everywhere with his hands folded behind his back – like his father and grandfather. Oscar also makes his hands and fingers into little “characters”. He has them scurry around and talk, hide and surprise each other, and occasionally surprise other people. I am told his uncle did the same thing as a child. Oscar has also “inherited” from his big sister the sassy head tilt with an eyebrow raised, followed by a roll of the eyes – a family trait we might be happier to part with.

Each of my children has shaped me in some way, but Oscar probably the most significantly. Before I had him I would have said that I was a pretty balanced person, with my priorities in the right place. Part of what was shattering about having him was discovering the things I had unconsciously overvalued; beauty, intelligence, the expectation to do well at school and that my children would automatically grow up to have a spouse and children of their own.

One of the things I treasure most about Oscar is that he has enabled me to totally redefine beauty. Sometimes I imagine I feel the way a great art critic must feel upon discovering some unknown and incredible talent in a remote village. My idea of beauty – not just appearance but as a way of living – was so unoriginal before. I have made a great discovery in the beauty of those captivating almond eyes. His small nose is perfection and I love to kiss the back of his neck – right where the doctor found the enlarged nuchal fold. I have the privilege of looking at the world differently now. Once I might have tragically thought, “How could this happen to me?” But now I ask in thankful awe (like I’ve won the lottery), “How could this happen to me?”

Sarah McEwen is the mother of four children, Eleni, Oscar, Pippa and Willa. She and her husband are teachers and they live in Geelong, Victoria.

Submit your own story for our new series here.